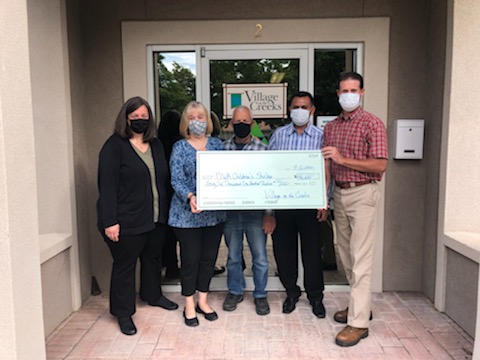 The Northwest Arkansas Children’s Shelter (NWACS) has announced that the ownership, management and tenants at Village on the Creeks, the iconic mixed-use commercial property in Pinnacle Hills in Rogers, have joined together in a challenge grant that raised a total of $46,122 in support of the continuing mission of the Shelter to protect and support at-risk children in the Northwest Arkansas region. The Northwest Arkansas Children’s Shelter opened its doors in 1993. Since that time, NWACS has served more than 11,000 children. The Shelter provides a safe place of healing for children ages birth to 17 who have suffered the trauma of abuse, abandonment and neglect. Carla Laing, speaking on behalf of NWACS, praised the initiative of this group of commercial businesses for seizing the initiative to share some of their resources at a time when funds are so desperately needed. “We are so appreciative of this genuine expression of love and support from these prominent businesses. It shows the incredible generosity which is evident throughout our wonderful community. We had no idea this was coming! It came out of the blue at a time when we really needed it. We simply cannot express how thrilled we were when Leslie called and explained that we were the chosen beneficiary for this fund-raising event.”The Leslie to which Carla referred is Leslie Logan who has been a member of the property management team at Village on the Creeks since 2008 and has been with Devereux Management since 2010. Leslie explained, “We know that some of our tenants have certainly seen challenges to their own businesses in the wake of the COVID-19 pandemic, but they were still willing to reach out and share with such a worthy institution as the Children’s Shelter. Our new ownership, which includes two owners of Slim Chickens and the senior partners at the Eldridge Brooks Law Firm, were eager to participate when I shared this idea with them and suggested a challenge grant.We are delighted to report that we had participation from 21 different businesses in addition to gifts from all our owners individually. We could not have been happier with the outcome!”Village on the Creeks contains over 300,000 SF of commercial space under multiple ownerships. OZRE, acronym for Ozarks Real Estate, a real estate investment group focused on long term investments in Northwest Arkansas, is controlled by Tom Gordon and Greg Smart, co-owners of the rapidly growing Slim Chickens franchise headquartered in Fayetteville, and Steve Brooks and Conner Eldridge, senior partners at the Eldridge Brooks Law Firm. OZRE acquired approximately 220,000 SF in Villageon the Creeks earlier this year in a $32.3 million transaction. Devereux Management, which has managed the property since 2010, continues to manage the OZRE property as well as another 50,000 SF building in the park. Village on the CreeksSlim ChickensEldridge Brooks Partners

Jenny fought her whole life to be free of abuse and neglect. She finally escaped that world and arrived at the Northwest Arkansas Children’s Shelter where she immediately began to thrive.

Judea fought her whole life to be free of abuse and neglect. She finally escaped that world and arrived at the Northwest Arkansas Children’s Shelter where she immediately began to thrive. For the first time in 17 years, she imagined living a normal life just like every other high school student. This included a wish to go to high school prom.

Casey, her case manager during her stay at the Children’s Shelter, shares:

“My heart is filled with so much joy! I got the privilege to go to prom with one of my kiddos from the shelter. No, it wasn’t a typical prom situation, but when a kiddo finally escapes abuse for the first time in 17 years, we do all we can to make it a perfect night for her. She is strong, resilient, courageous, unique, ambitious and unassuming. She inspires me and she is one of the million reasons I will never stop fighting for these kids. Prom night was a sweet reminder that no matter how many hard days we have to face, these special moments make every single hard day completely worth it. If these kiddos can endure years and years of abuse, then we can endure an infinite number of hard days. We have to, because they need us.”

I learned to be proud of who I am.

I rode on a tire swing for the first time!

I learned that love is better than hate.

For DCFS use only

If you are interested in a rewarding job providing a safe haven and loving care to the most vulnerable children in our community, apply today!